Milestones from the recent history of EISZ project

The year 2020 is an important milestone in the history of the EISZ National Programme. This year, for the first time, we can summarize the extent of the open access transition by the transitional agreements. Documenting and analysing the changes that have taken place in the history of the national consortium during the last five years provides an opportunity to map the emerging trends, and also to better define what the Hungarian consortium model looks like.

However, before presenting this in detail, here is a brief summary of the first half of this year:
2020 posed unprecedented challenges for both EISZ membership and the Project Team. During the coronavirus pandemic, electronic databases that seamlessly provided online literature resources from our homes became even more valuable. Through the new generation agreements, members of the Hungarian research community had access to the current literature during the quarantine period, and were able to submit their manuscripts to the highly cited scientific journals. The option of publishing open access was continuously provided. Many scholarly publishers have made their resources temporarily freely available. The EISZ Project Team tried to keep up with the suddenly changing user needs. We have created a new menu on our website: a regularly updated collection of resources freely available during the coronavirus pandemic, and webinars for librarians and researchers, too. This collection has been viewed by users more than 40,000 times so far.

Content providers, as well as EISZ member institutions, also tried to react quickly to the growing demand for the remote access. The EISZ members and the publishers who had joined the Hungarian EduID Federation before, have also made more intensive use of Shibboleth authentication. New institutions as Identity Providers (IdP) and international publishers as Service Providers (SP) have joined the Hungarian Federation in this period to support remote access for researchers and students. In addition to current practice, publishers have sought to provide new, alternative solutions for smaller institutions to support remote access. In many cases, the publishers opened new contents: journals, university textbooks for the consortium member institutions. Acquiring these methods and promoting newly available content has greatly aided online curriculum and research - and has been a big job for institutional librarians and EISZ Secretariat staff.

At the same time, unfortunately, we at EISZ department were not able to get prepared and prepare the member institutions in advance for all unexpected situations. In recent months, the global economic and financial effects of the coronavirus pandemic have also had a significant impact on the consortium-level licenses. Due to the effects of exchange rate changes that were much larger than planned, there was a shortfall in the annual budget of the EISZ project, which made it impossible for the EISZ Secretariat to provide services at the usual level until the end of this year.

40% of the missing financial resources were filled by the National Research, Development and Innovation Office, provider of the EISZ central budget. The remaining 60% additional payment was received from higher education institutions and the Eötvös Loránd Research Network as the largest user- and publishing-institution groups. According to the supporting authorities, the EISZ project contributes greatly to the development of Hungarian science and the operation of the RDI system by purchasing national licenses. In addition, EISZ has concluded a number of open access agreements in recent years, which have enabled significant savings at the HE-s, research institutes and the entire research community.

We would like to thank the EISZ member institutions for their support, in addition to the financial assistance, for their understanding, all the encouragement and good words that meant a lot to our team and contributed greatly to the success of the consolidation!

Due to the special circumstances, our pre-planned events were also missed. User trainings or "How to Publish?" workshops have been held in the form of webinars, some of which have been highly attended. This shows how large demand there is for this type of events.

The conference of the EISZ member institutions located crossborders of Hungary, originally scheduled for May, was also missed. With the help of the financial support provided by the National Research, Development and Innovation Office, we were able to provide high-quality, current resources in Hungarian language for more than 30 higher education institutions, research institutes and other public collections across our borders.

We believed that a comprehensive study, available both in paper and open access electronic format, might be an effective substitute for face-to-face meetings, while a worthy commemoration of involving cross-border institutions in our domestic scientific programmes, especially in the Trianon Memorial Year. The editor of the volume is our senior librarian, Ákos Lencsés PhD, head of institutional coordination at EISZ, the implementers are the team members of the EISZ department. The volume is expected to be published in September.

We are pleased to inform the members that the three-year in-house development of Compass+ interface has also come to an end. Live testing of the new platform will begin in early August, with a smaller group of EISZ coordinators who will later act as Compass+ chapters. Based on their feedback, the system will be fine-tuned before it is made available to full membership.

But what is Compass+? How is it different from the already well-known Compass platform?

The original Compass database, now available for the fourth year in a row, is a database: a search interface for electronic scientific content and self-developed databases acquired by Hungarian higher education institutions and research centers under either a national license or individual subscription. The development of the database took place in 2017 with the support of the National Research, Development and Innovation Office.

The aim of the current Compass+ project is to create an interactive platform that provides guidance to EISZ member institutions as well as members of the research community and decision-makers, on institutional performance measurement, ranking and research assessment through a user-friendly, efficient and customizable interactive interface based on the huge amount of data available at EISZ.

The 5 main functionalities of the new development are: collection management, database overlaps, usage statistics, scientific output, and the recording of open access costs with a rate-of-return indicator.

According to our plans, the new platform will be available to EISZ member institutions from October this year. The project coordinator of Compass+ is our librarian colleague Péter Sütő.

Many ideas have been born for the open access transition since the 2002 Budapest Open Access Initiative. After a less successful first decade and a half, events have accelerated in recent years, as research organizations and consortia across Europe and globally are representing them increasingly, enforcing the principle of open access in agreements with publishers. Proposals such as the 2017 OA2020 initiative or the 2018 Plan S guidelines provide significant support for the movement.

There was no clear picture of how much researchers and institutions spend on publishing in Hungary either. Characteristically, in addition to the green open access provided by the repositories, it only had an ad hoc open access membership from a university and a research institute, which provided a certain amount of APC discount. However, lack of a complete national landscape and collaboration among the stakeholders resulted no significant steps in the progress.

The transition to open access entered a new level in Hungary in 2018, with the conclusion of the first consortium-level transitional open access contracts. In the first year, two such contracts were signed with De Gruyter and Taylor and Francis. Their experience was used to negotiate successfully with other publishers, opening up a wide range of transformative projects for universities and research institutes participating in the consortium. This process was well-suited to the forefront of international trends, as Hungary was among the first to conclude such agreement with Elsevier in 2019. 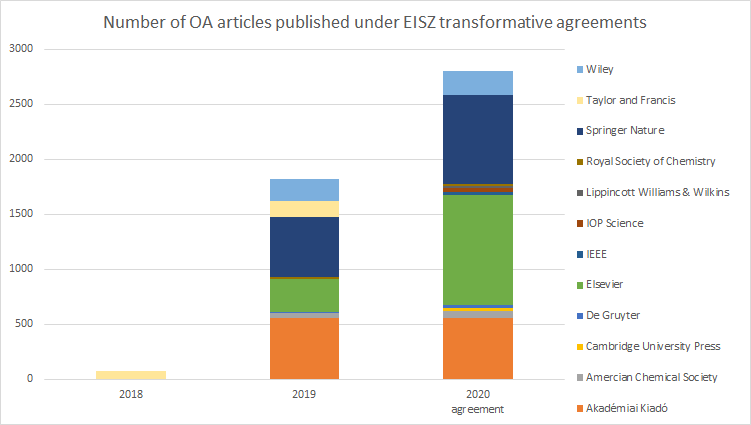 Thanks to EISZ open access agreements, a nationwide system is emerging, providing domestic research funding organizations and decision-makers a better insight to those expenses that were not previously transparent.

What is more, an additional added value of these agreements is that much of the administrative burden associated with open access publishing (such as managing APC accounts) is taken off the shoulders of the authors.

For 2020, EISZ has entered into 11 transformative agreements at consortium level with the following publishers:

Thanks to these agreements, researchers as corresponding authors affiliated at one of the institutions participating in the consortium, can publish their accepted articles open access without paying any additional institutional APC fees. Articles are licensed under a Creative Commons CC-BY or CC-BY-NC-ND license.

Eligible articles are automatically identified by most publishers based on the affiliation and e-mail address of the corresponding author.

The number of open access articles published under the umbrella of EISZ transformative agreements has increased exponentially. The agreements already allow the publication of 2,800 open access articles nationwide this year. This number exceeds a quarter of the expected annual scientific output of the Hungarian research community. In addition to significantly increasing visibility of the Hungarian science, it is also expected to save 55 million EUR in publication costs at national level.

The impact of the new generation agreements on the internal ratio of the annual publishing output can be well traced. The proportion of open access articles is expected to exceed 75% of the total output in 2020 and will become an increasingly large majority versus the articles available behind the paywall. 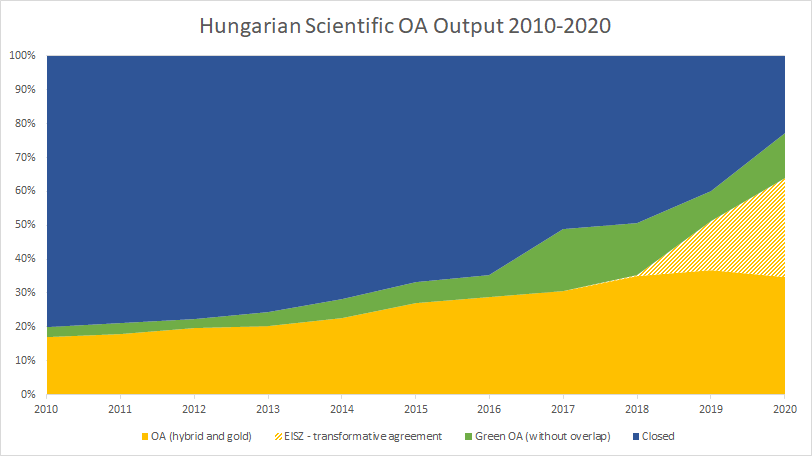 (* The report is based on Web of Science data)

The success of the transformative agreements is partly due to the fact that the open access publishing option makes it more attractive for research-intensive institutions to join the consortium. And the involvement of new institutions will make the consortium even more stable. Moreover, the possibility of concluding open access agreements also made the formation of new consortia in 2020 possible, as in the case of IEEE.

With the expansion of the agreements with the most prestigious publishers, the coverage of the scientific fields has also become more complete.

Regarding the article journey, publishers try to deviate as little as possible from traditional publication processes, thus helping the authors to get used to the new model.

For authors, article submission in most cases does not change anything. The right to publish APC-free open access under the interim contract will be identified after the acceptance of the article.

Conditions for eligibility: the correspondent author of the article should have an affiliation at one of the institutions participating in the consortium, the article has to be published in an eligible journal according to the duration of the agreement. The only exception is Elsevier, where submission date the article is the starting point of the article journey.

For most publishers, identification is an automated step using the author’s affiliation and the e-mail address registered in the article submission system. Therefore, it is especially important for the proper affiliation to enter the correct name of the institution or select it from the drop-down menu, and also to use the institutional e-mail address when submitting the article.

Once the article is identified, it will be licensed which will be different for the open access or the subscription publishing model. Unfortunately, the effectiveness of article identification varies from publisher to publisher, so it is definitely worthwhile for the author to handle this step carefully. If the author experiences any discrepancies, like the publisher offers a license form that does not comply with the guidelines, be sure to contact your institutional library or the EISZ team to avoid missing out on APC-free open access publishing.

It happens that researchers opt for open access after the publication of the article. In this case, most publishers are open to retrospectively turn the paper open access.

The mission of EISZ is to further improve the efficiency of the publication process in cooperation with publishers, librarians and authors, and, if possible, to publish all eligible articles under the transformative agreements open access to support the effectiveness of the transition in Hungary.